• Net loss from continuing operations of $3.4 million for 3Q17, compared to $1.9 million in the same period last year.

• Quarterly cash flow from operations was $8.4 million and free cash flow was $6.8 million (net of Capex).

• Increased availability on the credit facility from $65 million to $75 million and extended maturity by two years to May 2022.

John Chisholm, Flotek’s Chairman, President and Chief Executive Officer commented, “During the third quarter, the oil and gas industry experienced sequentially higher activity levels, but at a much more tempered pace from growth rates experienced in previous quarters. Commentary surrounding completion services inefficiencies, tightness in horsepower availability and overall delays is consistent with challenges our clients continue to navigate. Clearly, these challenges had an impact on our Energy Chemistry Technologies (“ECT”) segment, which was also impacted due to previously disclosed hurricane related issues. In addition to the challenges associated with hurricane Harvey, we experienced disappointing declines primarily in our Rockies region. Higher commodity prices and expanding takeaway capacity should help our cadence in this region in the future.

“Our Consumer and Industrial Chemistry Technologies (“CICT”) segment continues to be the cornerstone of our Company’s leadership in maximizing the value chain in citrus oils.  Hurricane Irma has impacted our outlook for declining material costs in this segment which we believed would have become a tailwind across the Company, primarily transferred to our ECT business.  While the damage to Florida’s crops was significant, we believe it will eventually be offset with the large growth ongoing in the Brazilian crops. We are beginning to see success in our expansions into Japan and believe higher margin opportunities in CICT will continue to present themselves through growing distribution channels. We initially expected greater revenue declines in the quarter, but after Irma, we have begun to see growing spot market opportunities which highlights our strong positioning in the supply chain to our clients.  We continue to be well positioned on our raw materials to meet internal and external needs.

“Having addressed what we believe to be underwhelming headline results for the third quarter, let me address the positive structural changes we have made with our SG&A and further planned reductions, which we expect to maximize future cash flow efficiencies of the Company going forward. We remain laser focused on maximizing free cash flow as a Company, and to that extent we generated $7 million in free cash flow during the quarter. This will continue to be a primary focus, accomplished through ongoing cost reduction initiatives, increased pace of new product development to address market needs and continued uptake of our Complex nano-Fluid® (CnF®) offerings and our Prescriptive Chemistry ManagementSM (PCMSM) solutions. Additionally, our strong market positioning in our CICT business at Florida Chemical should allow us to continue to navigate citrus supply challenges, and execute higher margin opportunities going forward.

“Total debt has been lowered 37% to approximately $30 million currently, down from $48 million at the beginning of the year. Flotek remains financially sound, and our liquidity remains strong.  Our ability to quickly scale growth programs in both segments maximizes our opportunities to allocate capital efficiently, and potentially execute further stock buy-backs.

“Hurricane Irma has impacted our outlook for declining raw material pricing in the near term, and into 2018. We believe this temporary disruption will eventually moderate, however we will adjust our cost structure accordingly to protect the cash flow capabilties of our Company. Meanwhile, the oil and gas industry is beginning to face inflationary pressures while our clients remain cost conscious in a lower for longer period of commodity prices. Despite this dynamic, we continue to see an increasing focus in scalable optimization programs and projects both in the field and through our industry leading Research & Innovation (R&I) facility.  We will continue to execute on our plan to structurally reduce SG&A expenses which we believe will create significant long term shareholder value and maximize our cash flow leverage going forward.”

A summary income statement reflecting third quarter results can be found at the conclusion of this release.

* Percentage change may be different when calculated due to rounding.

• International revenues increased 85.3% sequentially from the second quarter and 14.3% from the third quarter 2016, primarily due to increased CnF® sales.

• Declining topline and margin for CICT in the quarter was driven by anticipated larger orange crops in Brazil and Florida for the coming season, resulting in lower prices for citrus oils.

• The impact from Hurricane Irma is expected to benefit pricing in the near term, as citrus oil prices remain elevated.

• Our new distillation tower is nearing completion, and should be operational by December.

Net Debt decreased 9.3% from $39.3 million to $35.6 million, sequentially, while working capital benefits were $6.0 million primarily driven by inventory and accounts receivable reductions. Total liquidity at quarter end was $39.2 million. Our current balance on our credit facility as of October 31, 2017 was $30.4 million, compared to $42.7 million at the end of the second quarter, and current liquidity is at $47.5 million.

In commenting about Flotek’s outlook, Mr. Chisholm added, “For the fourth quarter, we are anticipating a typical slowdown through the holidays in our ECT segment in line with clients’ activity levels and fewer daylight hours.  In our CICT segment, we expect the top line to modestly decline sequentially with typical seasonality, but outperform last year’s quarter year-over-year.  We anticipate consolidated G&A to continue to decline, while segment G&A to be somewhat flat sequentially and capital expenses to be in the $3 million to $5 million range.”

Flotek will host a conference call on Wednesday, November 8th, at 9:30 AM CDT (10:30 AM EDT) to discuss its operating results for the three months ended September 30, 2017. To participate in the call, participants should dial 888-228-0565 approximately 5 minutes prior to the start of the call. The call can also be accessed from Flotek’s website at www.flotekind.com.

Further information about the risks and uncertainties that may impact the Company are set forth in the Company's most recent filings on Form 10-K (including without limitation in the "Risk Factors" Section), and in the Company's other SEC filings and publicly available documents. Readers are urged not to place undue reliance on these forward-looking statements, which speak only as of the date of this Press Release. The Company undertakes no obligation to revise or update any forward-looking statements in order to reflect any event or circumstance that may arise after the date of this Press Release. 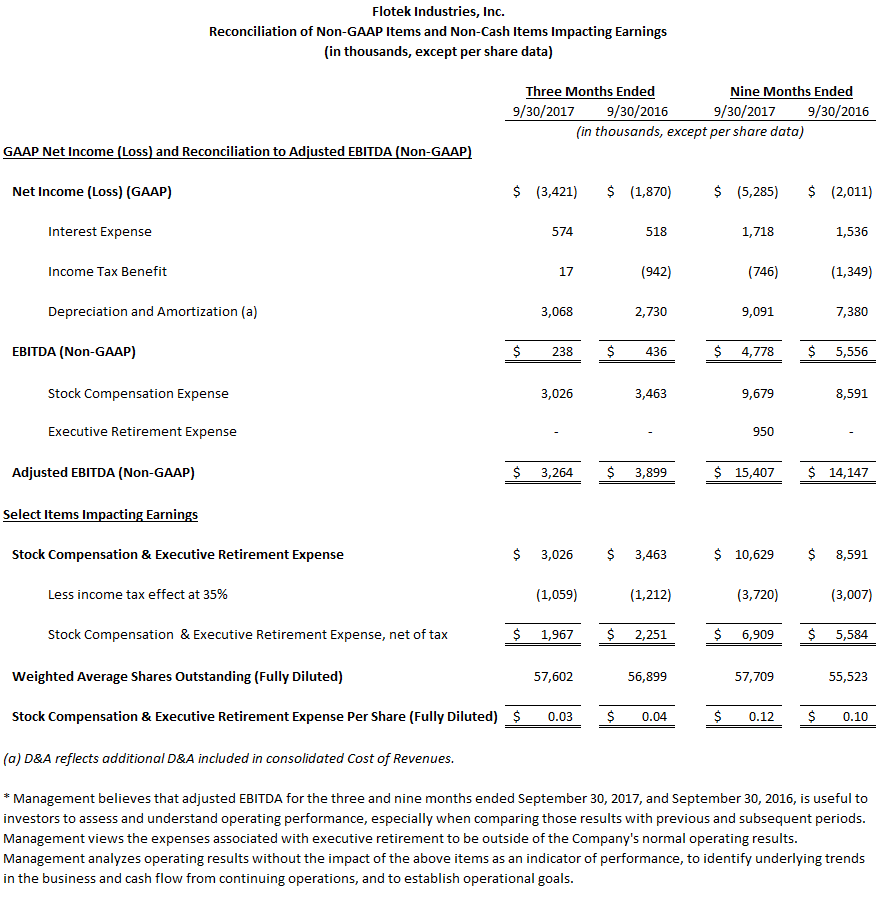 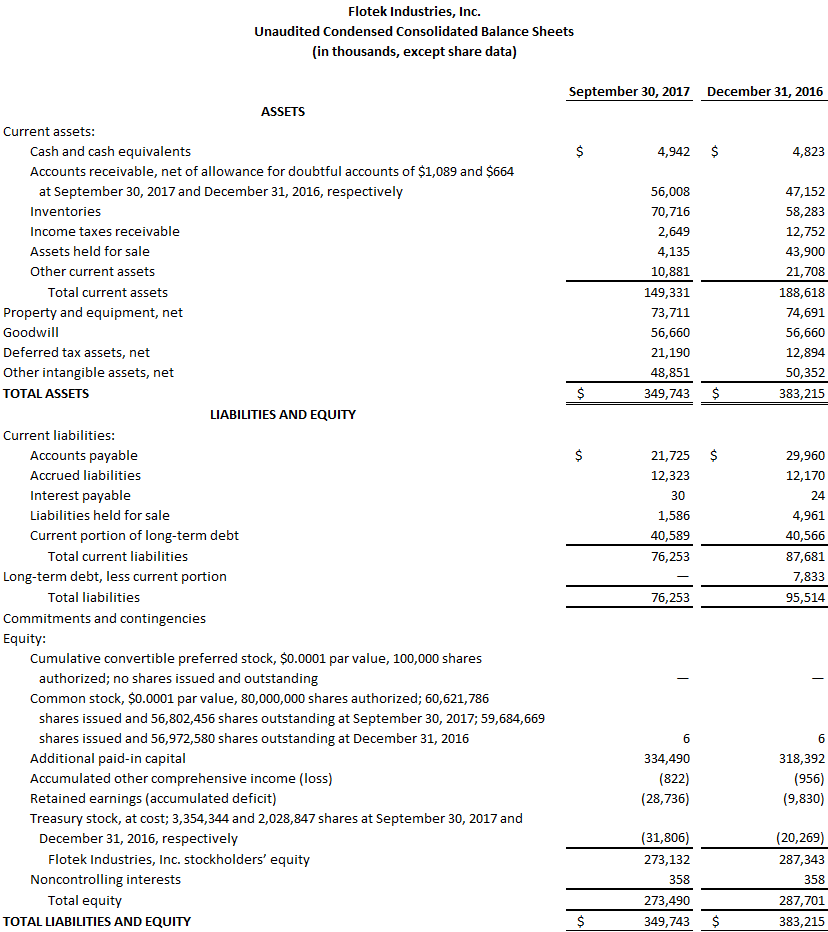 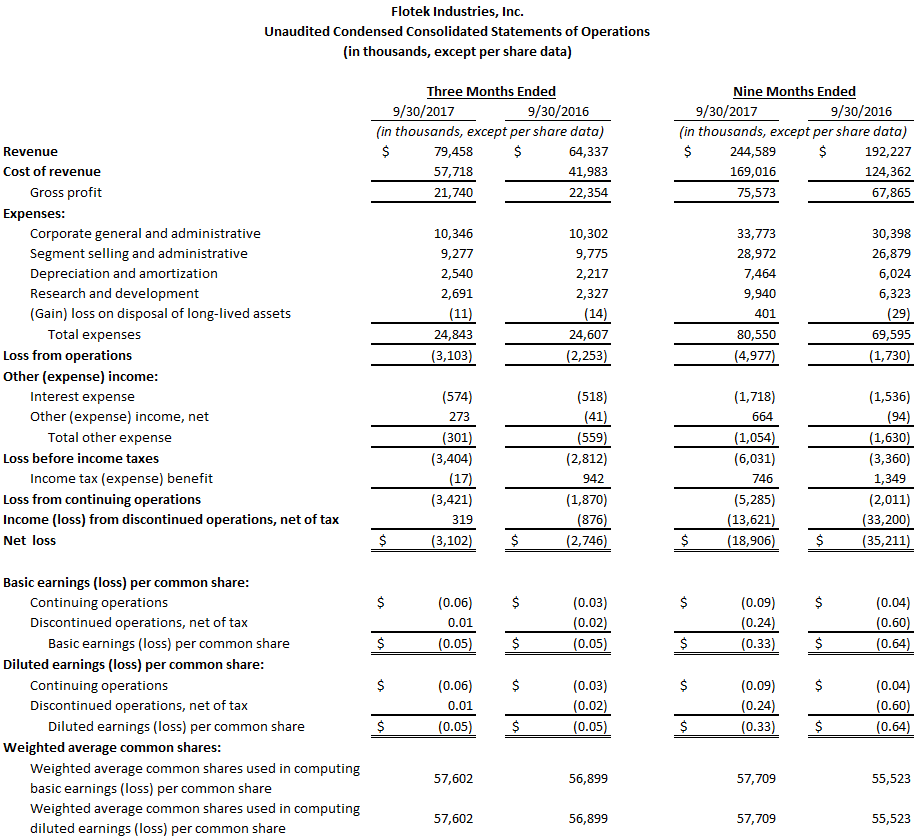 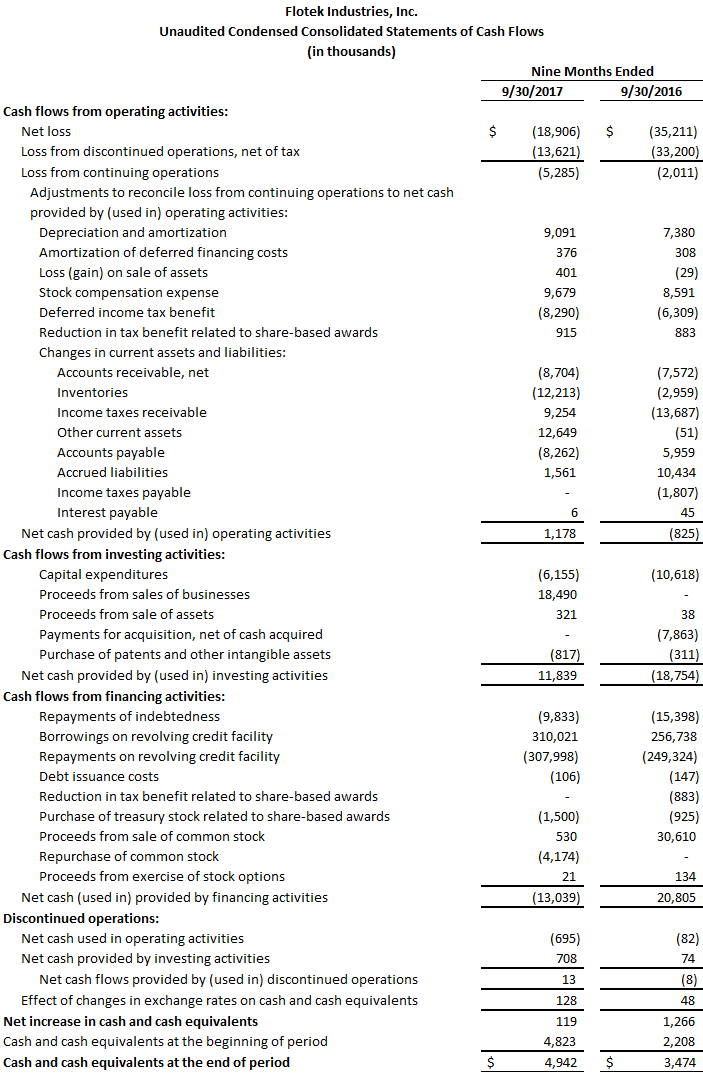